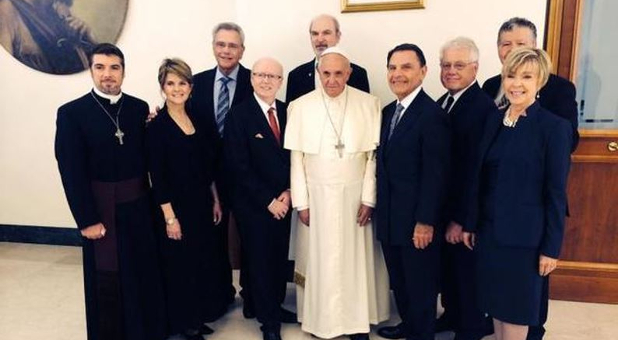 Article by: by Bruno Ierullo on Jun 25th, 2014
On June 24, 2014, Saint Jean Baptiste Day, annually celebrated in Canada we also celebrate what took place at Palazzo Santa Marta, Vatican City where invited guests gathered at Pope Francis’s private residence. Guest include John and Carol Arnott (Founders of Catch The Fire), Kenneth Copeland (Founder of KCM Ministries), James Robison (Founder of Life Outreach Int.), Geoff Tunnicliffe (Head of Worldwide Evangelical Alliance), and Tony Palmer (Bishop & Int. Ecumenical Officer of the Communion Evangelical Episcopal Churches). These ministries met for a cordial gathering and lunch to begin a friendly relationship that could have a far reaching impact.
This initiative by Pope Francis is a further reaching out to the Evangelical world after his cell phone message recorded earlier this year. This time it is followed up by bringing the five ministry leaders who represent a large portion (in total approx. 900 Million Evangelicals) of the body together for a historical event, which is undeniably God-orchestrated.  At the age of 77, Pope Francis is full of strength, bold, outgoing, a people’s person, charismatic, and Spirit-filled. Weekly, tens of thousands of people flock to St. Peter’s Square on Wednesday mornings to hear him share.  People are drawn into experiencing the fullness of being a Christian through a daily relationship with Jesus as their Saviour and Lord. He has the potential of being one of the greatest evangelists of the Gospel today! One of the pivotal reasons of today’s meeting was to start a conversation together in what it means to receive SALVATION personally. This was the beginning of a Joint Declaration between this large faction of the Evangelical world and the Roman Catholic Church.
All churches — Protestant, Roman Catholic, and Orthodox — at times make audacious statements about one another, negating the other and affirming itself, as if the individual church had a monopoly on what it means to be Spirit-filled and born again.  From my experience as an Evangelical minister with Charismatic/Pentecostal influence, unless our church remains prophetic, we have a tendency towards institutionalism and legalism. If it smells like “Religion”, I don’t want it. I want God and a relationship with him, not a form of religion. If you can say amen to this, you probably use the same Evangelical language most of us as Evangelical ministers do. However, I have to enlighten you. I first heard this kind of language through the mouth of Pope Francis. We may be more in sync with our Roman Catholic brothers and sisters and the Orthodox than we are aware.
Now imagine that every church’s core aim was to be made up of followers of Jesus who are born again and Spirit-filled. Will you not rejoice and pray for Pope Francis? He is a man of influence and popularity who has a large weekly audience — with probably some of the largest open air meetings in our time. Many have had the privilege of seeing Pope Francis in action. Out in the square 40 minutes before the weekly meeting starts, he blesses children, touches all who he can reach, and walk freely in the crowd. After all the mingling, the service starts, and he sticks with the script and preaches the Gospel, but he periodically puts the script aside and spontaneously speaks to people’s hearts. Once the service is officially over, he is back mingling with the people and ends the day praying for the sick. Doesn’t this sound like Jesus?
In the weeks to come we are going to be hearing many news reports, articles and TV shows, both good and bad. Let me encourage you not to entertain some of the negative reports that have always been around regarding deceptive conspiracies. If you have embraced some of them, may I ask you to be open to hearing the heart of what John & Carol Arnott may have to say with their experience with the Pope or James Robison and others? We will hear more from them in the days to come.  Many of us have been trained in our thinking to question things by saying, “could any good come out of Rome?” I have been encouraged by the leaders who have had positive dreams considering te Catholic Church, such as Steve Long (Senior Leader at Catch The Fire) and Dan Slade (International Coordinator of the Partners In Harvest Network).  Dan had a dream (or a possibly a visitation) where he literally saw gold falling on Roman Catholics. I personally like to joke with my Romans Catholic friends by saying that they were the last mainline church that came into the Charismatic Renewal in 1967, but that they could possibly be the first to be in the greatest move that is yet to come before the return of our Lord. The first shall be last and the last shall be first.
If you are a leader in your Christian community and/or Church and have any questions and/or desire to learn more about reconciliation and unity and about what God is doing in the Roman Catholic Church (specifically in the Catholic Charismatic Renewal) come and join Bishop Tony Palmer and other leaders such as Professor Matteo Calisi and Deacon Carlos Nogueira of the Archdiocese of Toronto.
Taken from RevivalMag.com
To read the rest of this post, please visit:
http://revivalmag.com/article/unity-diversity